The first website for Northern California Publishers & Authors (then called Sacramento Publishers Association) was hosted by one of those companies that offered free sites if their banner ads were displayed at the top of each page.

I remember because I built it.

That site was built with (gasp!) tables for positioning. Tables, and bright colors, and that little stats tracker at the bottom of the page.

(Oh geez, it looks like that account was never closed. When I opened up the archive file to take a screen shot, the tracker image was linked to Extreme Tracking — “Counting since: 22 Jul 2000.” Oops.)

Over the years I made incremental changes to the design. When the site was moved to paid hosting in late 2001, the logo was also redesigned to fit the spot previously taken by the advertisement. When the organization changed its name again, I swapped out the logo. But that was it as far as making changes. Maintaining the site took enough time, I wasn’t going to volunteer to fix something that wasn’t broken.

A two-year break from maintaining the NCPA site gave me a chance to convert my own website to that new-fangled CSS thing. I worked with blogs and databases and content management systems, and when I became NCPA webmaster again, it was time to drag the site into the 21st century. 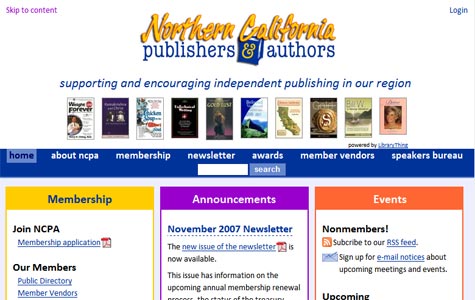 I settled on WordPress for the CMS. The templates are easy to build, and the admin interface is easy to understand and customize.

I wanted to make the site easier to update so all the work doesn’t end up on one set of shoulders. I’m still working on not doing all the work, but updating and adding pages is much faster and easier: log in and type. New announcements and events are automatically shown on the front page. I don’t have to remember to put information in multiple spots; I don’t have to remember to change it when it’s outdated.

And I wanted the site to showcase members.

Thank you, LibraryThing. After creating an NCPA account and entering all our members’ books into the catalog, I could display members’ book covers on our site by copying a bit of code from the LibraryThing site. Each book cover is linked to its listing on Amazon.com; click a book cover for more information.

I’ve got some ideas for other things to add — a group blog, anyone? — but for now the NCPA site is closed to major changes.

Sandra K. Williams loves books, both printed and digital. Since 1996 she has worked with authors and independent publishers, editing and designing books for print. Since 1999 she has built easy-to-use, accessible websites, and she uses her HTML and CSS skills to design reader-friendly e-books.
Filed in Websites and tagged design, LibraryThing, NCPA, WordPress.